Washington, D.C. – November 13, 2019 – The Arbor at Galloway Ridge is among the 19% of U.S. skilled nursing facilities that have been recognized as a Best Nursing Home for 2019-20 by U.S. News & World Report. The home earned Best Nursing Homes status by achieving a rating of “High Performing,” the highest possible […]

Honoring a Man Of Honor Galloway Ridge strives to create the kind of community that people want to belong to, and we have our residents to thank for it. People who choose to live here come from all over and bring a wealth of experience, knowledge, and passion with them, but even if they worked in a […] 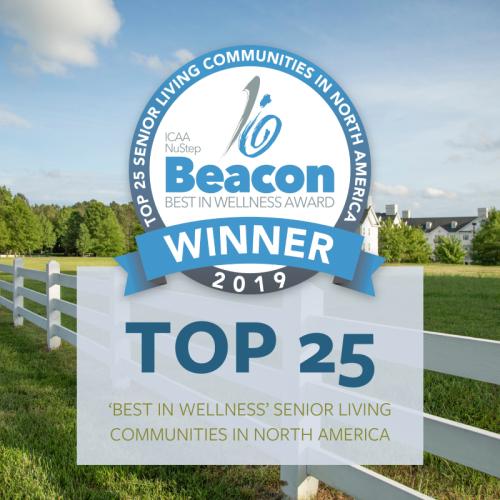 Pittsboro, NC, October 10th, 2019 – Galloway Ridge has won the 2019 ICAA NuStep Beacon Award, which recognizes and honors the Top 25 ‘Best in Wellness’ senior living communities in North America. Galloway Ridge is among those recognized as best-in-class for successfully fostering a wellness-centered environment to benefit all who live and work in their community. The award was […] As part of the UNC School of Nursing Global Partnerships program Galloway Ridge hosted eight nursing students from Australian Catholic University for an afternoon of education and discussion on the life plan community concept in the United States. The students learned about all of the available senior housing options in the United States along with […]

Living Your Best and Longest Life in Fearrington Village “A long life is a life well spent.”—Leonardo da Vinci  If you are not a regular subscriber to The Washington Post, you may have missed a small article they published in the past year. The article reported on an analysis of National Association of Public Health Statistics and Information, comparing life expectancy in different areas […] On April 4th, four of Galloway Ridge’s veterans gave of their time and energies (and got up REALLY early!) to serve their fellow veterans.  John Stell, Al Schalk, Chet Rogers, and Bob Kelly found their way to the GR kitchen for a 5:30 AM departure to Jordan Lake.  These fine veterans/residents spent their morning assembling […] FOR IMMEDIATE RELEASE, August 29, 2018   Galloway Ridge exists to inspire meaningful and engaged lives and to assure each resident a superior quality of life and care.  In support of our mission the Community Grant Program of the Galloway Ridge Inc. Charitable Fund was established in 2006 to serve the citizens of Chatham County. […]

Why Preventive Care Should Be Your Priority “Old age is no place for sissies.” – Bette Davis  People who want to live a healthy, active lifestyle don’t hesitate to eat a well-balanced diet and exercise regularly, but they may not be as likely to seek preventive care from a doctor. If you are like most people who only go to a physician […]

Don’t miss out on Galloway Ridge news and events! Enter your email below: